They say the evidence suggests it’s best to leave them in unless they are causing problems.

But others argue such calls are driven by economic considerations rather than what’s best for the patient.

They say this approach, taken in the UK, is based on the best available evidence and saves money by leaving alone wisdom teeth that were never going to cause a problem in the first place.

“The core message is using evidence to drive healthcare reform,” says Professor Marc Tennant of the University of Western Australia, who worked for 20 years in public health dentistry.

“In Britain when they started to apply some evidence-based criteria, the number of teeth they needed to remove dropped, and has remained relatively low over the past 10 years or so.”

Wisdom teeth are the last of our teeth to emerge — starting to appear by age 17.

In a large proportion of cases the teeth become impacted, remaining hidden under the gums or pushing into other teeth.

Dentists often remove impacted wisdom teeth to avoid the risk of problems such as pain, gum inflammation and decay.

But Tennant points to guidelines from the UK National Institute for Health and Care Excellence (NICE) that say only patients who have diseased wisdom teeth or other problems should have their wisdom teeth removed.

The UK guidelines say there is no evidence that taking out asymptomatic teeth as a precaution benefits patients. Instead, they advise dentists keep a close eye on the teeth to see if they develop problems.

Indeed, the NICE guidelines point out, surgery itself can lead to complications such as nerve damage, damage to other teeth, infection, swelling, bleeding, pain or affect a patient’s ability to open their mouth fully.
Rates of removal

Tennant and colleagues, including graduate student Abed Anjrini, previously found 527 per 100,000 Australians were admitted to hospital for impacted wisdom teeth removal in 2008/09 — a rate seven times higher than in the UK and continuing to increase.

In the new paper, the team calculate the savings that would result if Australia took a similar approach to the UK.

However they included an even more stringent monitoring regime than that recommended by the NICE guidelines, including dental x-rays every two years.

The researchers say a ‘watchful monitoring strategy’ would save Australians between $420-513 million a year, including indirect costs (for example time off work).

Most of the costs involved in wisdom tooth removal in Australia are borne by individuals, usually drawing on their private health insurance.
Economic driver

But Dr Rick Olive, president of the Australian Dental Association, argues the approach taken by the UK, and recommended by Tennant and colleagues, is just a cost-saving exercise.

“This is the argument that is used by those who seek to ration healthcare,” says Olive, who is currently involved in researching the impact of wisdom tooth removal himself.

An important thing to consider, says Olive, is that the older you are when you have your wisdom teeth out the more likely you will suffer complications from the surgery, which affects 5 to 21 per cent of people.

Watchful monitoring also means you will also receive extra radiation from dental x-rays in the meantime, he says.

Olive believes the UK approach just defers problems arising from wisdom teeth and will result in an increasing rate of surgical complications.

Although, he adds, we won’t know if this is the case for another 15 years. 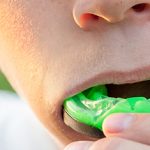 Sporting accidents are one of the most common causes of dental injury. Every year thousands of people, including children, are treated for dental injuries that could have been avoided or minimised by wearing a protective, custom-fitted mouthguard.

Why do you need a mouthguard?

Damaged or knocked out teeth, broken jaws and cut lips can be sustained when playing sport. Wearing a custom-fitted mouthguard helps to absorb and spread the impact of a blow to your face, which might otherwise result in an injury to your mouth or jaw.

Dental injuries can result in time off school or work to recover, can be painful and disfiguring, and may involve lengthy and complex dental treatment. The cost of an injury to your teeth or jaw far exceeds the cost of a custom-fitted mouthguard.

When should I wear a mouthguard?

Custom-fitted mouthguards should be worn whilst playing and training for any sport where there is a possibility of contact to the face. These sports can include hockey, netball, baseball, basketball and even skateboarding and skiing. Just like having the correct shoes and sporting equipment, all people playing these sports need to wear a custom-fitted mouthguard. 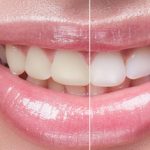 This is a short check list of things you need to consider before you decide on a teeth whitening treatment. Once you’re up to speed with the main things to think about you can explore the issues in more detail throughout the website.

Should I be whitening my teeth?

Not everyone’s teeth are suitable for whitening. If your teeth and gums are not in a healthy condition before you whiten, the procedure may cause more damage. Even if there is nothing wrong with your teeth there may be other reasons why whitening won’t work.

How can I find out if my teeth are suitable for whitening?

The safest way to work out if your teeth are suitable for whitening is to see your dentist first. Dentists are the only people trained and qualified to make an accurate assessment of your teeth and gums.

What should a proper assessment include?

Your dentist will check for things like enamel thickness, receding gums, existing sensitivity, existing tooth decay, existing restorations (e.g. fillings, crowns and veneers), any other oral diseases or conditions. He will also assess the cause of discolouration, (e.g. diet, ageing etc.) and whether it is on the surface or inside the teeth. Only a qualified dentist is able to carry out these checks and then recommend a suitable whitening treatment.

What can go wrong?

For many people teeth whitening poses no serious risk if done correctly. However, if you choose the wrong treatment for your teeth or that treatment is applied incorrectly (e.g. whitening products are often used too frequently or applied for too long a time) then some damage can occur.:

What results can I expect?

Depending on the cause of the discolouration results can range from impressive to disappointing so it’s important to understand what can reasonably be achieved before you go ahead with any whitening procedure. The reality is that most people will achieve a one or two shade change but many will see no change at all. What works for one person will not work for another. Again, your dentist will be able to advise you.

If you’re keen to improve the whiteness of your teeth, go through these steps so you can be sure you have chosen the right treatment. It could save you from unnecessary pain and possibly irreparable damage to your mouth.